Like with my other article on Particles in Action, this article will go into detail the whole of Topic 6, Medical Physics which includes heart and how to monitor it, nuclear radiation which involves background radiation, exposure to radiation, treating cancer using radiotherapy, gamma radiation and brachytherapy, monitoring patients using pulse oximetry and the human body using energy. However, you are more than welcome to skip to the parts most relevant to you.

Heart
Before we go into detail about how to monitor the heart, let’s learn about how the heart works first. 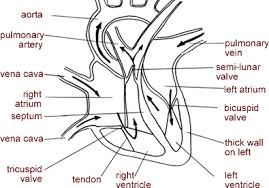 A question that is asked a lot is ‘how can the heart continuously beat for the whole of our life and never tire?’ Well you the answer is that it doesn’t continuously beat. Unlike every other muscle in our bodies, the heart when beating fully contracts the fully relaxes. This enables it to recover up until the next beat. Our normal muscles tire because they are never fully relaxed causing them to get a build up of lactic acid or ‘cramp’.

Contraction of the Heart

Relaxation of the Heart

This cycle represents one heartbeat.

Heart Monitoring
The electrocardiogram (ECG) is an important diagnostic tool in medicine, recording the electrical activity of the heart. Electrocardiography electrodes are placed at specific points on the chest.
The heart is a hollow muscular organ that pumps blood around the body. The muscular activity is produced by a rhythmic electrical activity, which is being recorded by these electrodes. Many cardiac diseases show characteristic alterations to a normal ECG trace.

or    f = 1 / T
A normal heart beats regularly as it pumps blood around the body. An electrocardiogram (ECG) measures the electrical activity of the heart. Any abnormalities can be seen and identified.

The action potential (changes in electrical potentials) links with the graph:

The time period for a cycle depends on the body’s demand, increasing during strenuous physical exercise.
An ECG can be taken when the patient is resting or active, for instance on a treadmill or exercise bike.

Radiation
Nuclear radiation can be found in granite rocks containing small amounts of uranium. Where uranium decays it emits radon gas which is also radioactive. In areas such as Devon and Cornwall, where houses were traditionally built from granite, there is concern about the health risks associated with breathing in radon gas. More worrying to many people is the radiation caused by human activities, such as nuclear power stations and the use of ionising radiation in medicine.

Radiation knows no boundaries. After the Chernobyl accident at a nuclear power station in the Ukraine in 1986, prevailing winds blew radiation over much of Europe. Welsh farmers could not sell their lambs for several years because of the risk of radiation contamination.

When using radiation for medical purposes steps must be taken to protect:

A film badge is worn by people who work with radioactive substances to determine their exposure to radiation. The badge contains a piece of photographic film.

The thermoluminescent dosimeter (TLD) is more accurate and sensitive than a film badge. It contains lithium fluoride, which emits light when ionising radiation falls on it.

Cancer
Whenever radiation is used, for diagnosis or therapy, steps must be taken to minimise damage to healthy tissue.

High-powered gamma radiation, from a radioisotope such as cobalt-60, can be used to destroy a tumour inside the body, such as a brain tumour. But a large enough dose to destroy the tumour would also destroy the healthy tissue it passed through. This problem is solved in one of two ways:

Because we know how dangerous radiation is, here are some general safety rules when using radioactive sources:

There are several medical issues that have received wide publicity:

Radiotherapy
Not all cancers are the same. Different tumours need different treatments. The three main forms of treatments are:

Many patients receive a combination of these treatments. Radiotherapy directs beams of high-energy radiation (X-rays or gamma rays at a tumour to damage its cells. This means they are unable to reproduce or spread. Look at the above picture for what types of radiotherapy there are.

A radiographer carries out procedures using X-rays and gamma rays. A women being treated for skin cancer would have a lead block on her eye and cheek to protect the healthy cells from the radiation. The lead is covered in cling film because it is toxic on contact with the skin.

Using Gamma Radiation
Gamma radiation is used to treat cancer because it can damage and destroy cancerous cells. Large doses of radiation from a high-energy source such as cobalt-60 can be used in place of surgery or, more usually, after surgery, to try to make sure all the cancerous cells are removed or destroyed.

If any cancerous cells are left behind they can multiply and cause further problems, such as the development of secondary cancers elsewhere in the body. The side effects of the treatment can be unpleasant but it can slow down or completely cure the cancer.

Brachytherapy
Internal radiation, or brachytherapy, works by implanting radioactive ‘seeds’ directly into a tumour where they remain for a period of time. This targets cancer cells directly, making the tumour unstable. It can be used to treat a number of types of tumours including those in the mouth, lip and breast. Very thin radioactive needles, caesium or iridium wires or tubes are inserted.

They are left in place for a period between 24 hours and a week. Iridium-192 emits β- particles and low-energy gamma rays. It deposits most of its energy close to the cancer and so does little damage to the healthy tissue around it.

Using Radiation
High-energy, fast neutrons can penetrate target atoms and interact with their nuclei easily because they are uncharged. The collide with several nuclei producing considerable ionisation, before losing their energy.

Laser cross-hairs (red) are aimed onto the site of the patient’s tumour. Once targeted, a abeam of high-energy neutron is fired at the tumour. The neutron beam is formed by bombarding a beryllium target with protons which are deflected by a linear accelerator. The neutron beam will stop the tumour’s growth and could destroy it. The patient will be wearing a mask to hold the head still while the treatment takes place.

Monitoring Patients
When a person is very ill or undergoing surgery it is important to monitor them closely at all times. A pulse oximeter can be attached to a finger and connected to a microprocessor that gives up-to-date information on the patient’s cardio-respiratory system. Most pulse oximeter give out an audible tone, the pitch of which depends on the oxygen level in the blood in the arteries. This gives nurses an instant warning if all is not well.

What are ‘Normal’ Pulse Rates?
The average resting heart rate for an adult is between 60 and 100 beats per minute. Well-conditioned athletes can achieve 40-60 beats per minute. The maximum pulse rate is 220 minus your current age. The target for a healthy pulse rate during, or just after, exercise is 60-80% of this.

Pulse Oximetry
A pulse oximeter is worn on the finger. As well as the pulse rate, it tells the doctor how well the blood is getting oxygen. Pulse oximeters are now used routinely:

There are also portable versions as shown here. These are ideal for overnight sleep screening and making measurements when walking.

What Does a Pulse Oximeter Measure?
A pulse oximeter measures the pulse rate (in beats per minute) and the indirectly measures the amount of oxygen in a patient’s blood. It is often attached to a monitor so staff can directly note the readings at all times.

How Does it Work?

Intensity, I, is the power of radiation falling on unit area of surface:

The unit of intensity is W/m squared.
Under normal conditions arterial blood is 97% saturated.
A standardisation graph is obtained by getting volunteers to breathe in gases which give reduced levels of oxygen. As it is unethical to go below 70% saturation, results below this level are reliable.

If you want a detailed description of how pulse oximeters work, carry on reading. If not, just skip the bit below and move on.

More about Pulse Oximeters
Oxygen is carried in the blood stream mainly bound to haemoglobin. One molecule of haemoglobin can carry up to four molecules of oxygen. It would then be described as saturated. The average percentage saturation of haemoglobin molecules in a blood sample is the oxygen saturation of the blood. This is what is actually measured by a pulse oximeter.

How it Works
The light signal through the tissues varies because of changing volume of blood in the arteries with each pulse beat. This is separated by the microprocessor from the steady light absorption by other tissues. The absorption of light at two different wavelengths by haemoglobin differs depending on its degree of oxygenation. This is because the two common forms of the molecule, oxidised haemoglobin (HbO2) and reduced haemoglobin (Hb), have very different optical spectra in the range 500-1000nm.

The probe contains two LEDs, one in the visible red (660nm) and the other in the infrared (940nm) region and a photo detector to detect the light or infrared that has passed through the patient’s tissue.

The Human Body – Using Energy
The rate at which the human body uses energy is known as its metabolic rate.
Obviously, our body’s metabolic rate changes depending on what we do. But, if we are going to compare different people doing activities like exercise, we nee to know something else about their metabolic rate.

This will give you the rate this person  is using energy to do the activity. Unit is also in watts which = Joule per second.
If you didn’t know what the basal metabolic rate is, it it the base rate of human power we use when we are at REST. The energy is used to:

Will created AskWillOnline.com back in 2010 to help students revise and bloggers make money developing himself into an expert in PPC, blogging, and online marketing. He now runs others websites such as PoemAnalysis.com and RestoringMamods.com . After completing a Masters degree in Automotive Engineering with Motorsport, Will now works at McLaren designing super cars. You can follow him @willGreeny.