I am Will.
Learn more
7 minute read

Chapter 13 and 14 Physics A2 OCR Revision

When looking at the macroscopic world and gases, we need to have macroscopic properties to measure the gases with. This can be:

To perform an experiment of pressure vs volume, we need to make sure the mass and temperature of the gas stays constant. By changing the pressure, we can see how the volume changes. How are they proportional?

From this table and graph, it is clear it follows a typical y = mx graph where the y is 1/V and x is pressure. This is Boyle’s law of pressure vs volume. If pressure is inversely proportional to volume, them the equation for pressure vs volume is:

There is no ‘+ c’ in the equation because the graph passes through the origins. This also means that pressure x volume will find the constant. This brings us onto Boyle’s law:

For a fixed mass of has at constant temperature, pressure is inversely portion all to volume.

The next equation we will look at for gases is the pressure/temperature law which is also known as Charles’ Law. 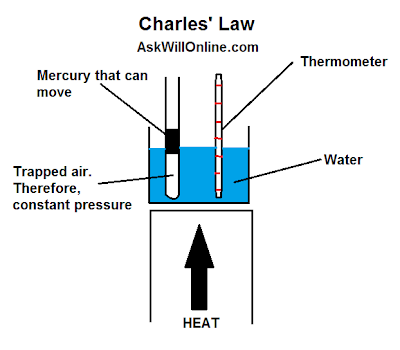 The above experiment produced the following table of results. This proves that volume is proportional to temperature.

From producing a graph of pressure x volume = constant, while having temperature and mass constant, it will produce a straight line graph passing through the origin.

From producing a graph of volume / temperature will also produce a straight line graph passing through the origin. At this time, both pressure and mass are constants.

From producing a graph of pressure / temperature will produce a straight line graph passes through the origin. Volume and mass are constants.

From these three graphs, we can gather that pV/T will equal a constant. We can then add the number of moles of the gas to the equation to produce pV/nT = R (constant). From this, the following equation is produced:

As a reminder, the molar gas constant is the energy needs to change one mole of gas by one kelvin through changing pressure and volume.
1.38×10^-23 is also known as the Boltzmann constant. It is also important to make clear that it doesn’t matter what type of atom it is, it is universal. This is because of the equation KE = 1/2 mv². The atom’s mass will vary causing velocity to change. However, the kinetic energy of the particle will not differ.

The Kinetic Theory Of Gases

The consequence of the above relationship is that there is a lower limit to when T = absolute 0. This implies that the volume will be 0 and pressure will be 0. Gases are made of tiny particles. The particles have kinetic energy which falls as temperature moves towards 0 kelvin. When the particles collide, this involves the transfer of momentum.

Newton’s third law describes equal but opposite forces on particles and the walls of a container. The collisions are elastic which creates the pressure.

From observable measurements and chemistry:

But, what does this mean? From kinetic theory, we can produce this equation:

Therefore,  vrms = 3p / ρ (rho) = (3 x pressure) / density. Root mean square or ‘vrms‘ is a microscopic quantity and pressure (p) and density (ρ) are macroscopic properties. vrms  is appropriate as it is taken from a range of speeds and if we averaged only v, as it is a vector, it would equal zero.

This produces the final equation:

For gases, the average KE is proportional to Temperatre for one molecule or particle.

This can be observed in crushed pollen grains in water, carbon particles in oil, small polystyrene beads in water and smoke particles in air. The motion is that particles adopt a random walk. This is because they are continually being bombarded by other particles colliding with them. For this reason, they are constantly changing direction randomly. Particles such as air are actually moving at extremely high velocities (around 300 m/s). However, because they have such a low mass compared to, let’s say, a smoke particle, they don’t cause the smoke particle a huge change in direction: enough to make it randomly move.

For gases, we know that the average thermal energy is 3/2 KT for each particle. For all other situations, more generally, KT is the average energy of a particle.
How do we express these energies?
For groups of particles, we use the mole (6.023×10^23 particles). If we multiply KT by Na, we get NaKT which is the energy per mole at temperature T (in kelvin).

What Do We Really Mean By Average Energy, KT?

If a real gas particle were observed:

For a mixture of gases, at temperature T, the value of KT gives us the average KE per particle but for less massive molecules, their average speed will be greater. For example, a hydrogen atom will have a lighter mass and therefore a faster velocity. A oxygen molecule is heavier than hydrogen. Therefore, it will have a slower velocity to maintain the same KT as the hydrogen.

But, what do we really mean by average? What is the distribution of speeds that make up the average? From  an experiment, we found the average energy per particle of warm water to be 5.15×10^-20 J. The energy needed to vaporize one molecule of water (ε) is 6.76×10^-20 J. We can make a ratio:

The graph makes clear that when measuring the average energy of particles, we measure the highest probability density of the particles. You will find, though, that although KT is not enough energy to vaporise the particles (such as in a liquid), there will be some particles that will ‘get lucky’ with the collisions and gain enough energy to vaporize. This is at the point ε on the graph. ε is usually 15-30 times the value of KT. Therefore, ε/KT should produce a ratio of 15-30. Basically, a small proportion of the particles have the energy to vaporize.
ε/KT is a rule of thumb because we begin to observe the effect when the ratio lies between 10-30. For example, when boiling a kettle, steam starts appearing way before the average heat of the water is 100 degrees Celsius. It is statistical in its function and should be more precisely modeled.

The Magic Ratio and the Boltzmann Factor

We already know that ‘Magic Ratio’ to be ε/KT. This coincides with the Boltzmann factor which is e^-ε/kt. The ratio of numbers of particles in states differing by energy ε is temperature T.

Let’s say ε1 – ε2 = ε. If difference between ε1 and ε2 does not change (difference being ε), the ratio of the number of particles from ε1 to ε2 is always the same.

William Green Author
Will created AskWillOnline.com back in 2010 to help students revise and bloggers make money developing himself into an expert in PPC, blogging, and online marketing. He now runs others websites such as PoemAnalysis.com and RestoringMamods.com . After completing a Masters degree in Automotive Engineering with Motorsport, Will now works at McLaren designing super cars. You can follow him @willGreeny.

Hi! I’m Will and I created Ask Will Online years ago to help myself revise for school exams. Nowadays, I’ev created a passive 5 figure passive income, within 5 years, through SEO and an effective blogging strategy. I share my incites exclusively on Ask Will Online.
Learn more about Will

In this article I will go through all you need to know for Physics AS on Chapter 2.…
Read More

Brain activity causes an increase blood flow to certain areas of the brain. The oxygen carried by the…
Read More